New Media Art after Self-articulation and the Search for Identity

The use of multimedia and the search for identity as well as self-articulation have been of great interest to contemporary artists, and has impelled them to explore and develop new media art. In the eyes of the artist, new media offers a randomness, liveliness and scope for interactivity that potentially make them ideal vehicles of dynamic and creative expression. As Michael Naimark stated in his research report, “Technology-based art has become increasingly of interest to both art and technology communities, as well as to the public at large. It has been adopted by art centres interested in technology and by research labs interested in art, places with different cultures and histories”.[1]

Its adoption has indeed been such that new media art is verging on becoming the mainstream of contemporary art. Carl Cheng Chi Ming’s creative journey also seems to constitute one stream in this powerful current. 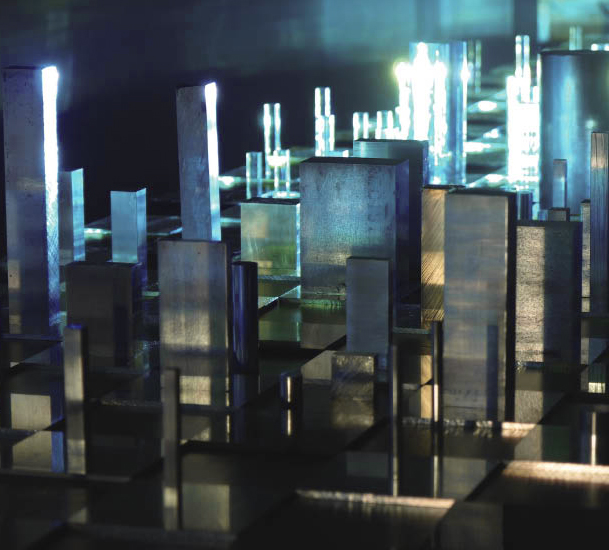 To appreciate Cheng’s work, we need to look back at his origins. He began to show an interest in art and design at an early age, but to fulfill family expectations, he subsequently chose to pursue the more ‘useful’ study of business administration in university. After graduation he dipped a toe into the creative realm by taking on freelance design assignments and eventually starting his own design company.

Running his own business did not mean Cheng’s wholesale conversion to glittering materialism. On the contrary, he became more determined to pursue pure art. For three years in the late 1990s he was a finalists in the Philippe Charriol Foundation Art Competition. Upon receiving his Master of Fine Art degree from the Royal Melbourne Institute of Technology in 2008, he began to devote even more of his time to contemporary art, and gradually became an active member of the local art community. Wearing the hats of artist, designer, curator and educator, Cheng himself resembles the multiple-discourse approach he frequently employs in his works.

Urban scenes and architecture are among Cheng’s favourite themes, and since his earlier works such as ‘Opposite’ (1996), ‘Doctrine of Bridge’ (1997) and ‘Blue City Blue’ (2001), his eye for visual detail and desire for perfection have become all the more apparent. The stack of square frames and the melancholic mood of his presentation were like a prelude to later installation works such as ‘End Game’ (2008) and ‘The Maze’ (2008).

Surely Cheng himself must have been mindful of the connections between the points of his creative journey – how one thing has led to another. He did, after all, choose Accumulation as the theme of his installation art exhibition at Flammer Gallery in 2008. As Alice Choi wrote in Lust Lies Under Dust, ‘accumulation’ in this case was a description of the endless architectural juxtapositions of a metropolis. It is an expression of the human ambition to transform the Earth, to becoming an embodiment of power, wealth and security.

I believe, however, that what is being accumulated is the thoughts and experiences of the artist. Although their mediums and materials are not the same, the thoughts and emotions of the artist are common threads in Cheng’s works, and these express a unique sentiment of the here and now. Accumulation denotes the relationship and the responses of the two elements. It also reflects Cheng’s rationality in his creative work, as well as his analytical and critical capabilities.

‘The Maze’ was Cheng’s first large-scale installation piece – a narrow passageway formed by large containers, flanked by stacks of long square wooden dowels that created mirror-like reflections. The frustration and helplessness of being trapped in a maze were strangely absent from ‘The Maze’: instead, a splash of romance was found in its light and shadows. This subverted the claustrophic uneasiness of real life in a concrete jungle.

Yet, if we are to stick to the theory of textualism, the presentation of an artwork is the culmination of linguistic symbols and forms. The dowels in ‘The Maze’ might be a symbol of urban architecture – a melody created by lines, lights and shadows – or even an urban sentiment of recording through knot-tying. But in reality, ‘The Maze’ was not about physical space; it was something creeping forward from the human heart.

Therefore, Cheng’s work started from the two-dimensional ‘Blue City Blue’ and the natural wood-toned ‘The Maze’, transformed into ‘End Game’, and still later evolved into ‘The Tao of Chinese Games’ (2009). While all show differences in form, media and materials, their essence and spirit remain more or less a constant. In my opinion, the key to ‘The Tao of Chinese Games’ is neither the arrangement of the chessboard nor the black-and-white order of it. It is, as the artist himself stated, “… the anticipation that someone can turn things around. No-one knows who the winner is until the last second. Challenging an unknown destiny awakens the most primitive desire”. Here, the sublimation of the libido is the real theme of the work. Excessive noise or words guidance would have undermined the beauty of the work’s understated tone.

Recently at the Coming Home – Art Container Project Documentation and Art Exhibition (2014), Cheng showcased ‘What is the Horizon’, in which embossed architectural images of varying height were showcased on a railroad track. This work strikes a fine balance between the artistic medium and artistic meaning. Notwithstanding its small scale, it is an excellent and delicate piece which lingers in fond memory.

Since ‘The Tao of Chinese Games’, more distinctively Chinese elements have permeated into Cheng’s work. Excerpts from Yang Ho in Confucian Analects were quoted to introduce the artist’s concept for the work, and one could also find images of the game of ‘Go’, Chinese chess, mahjong, and a chart of advancement for officials.

Cheng was also commissioned to create ‘Soaring Dragon’ (2014) for the Esplanade Theatres on the Bay in Singapore. The work was supposedly inspired by a chapter in The Book of Changes (I-Ching) and consists of 200 bamboo ladders. “‘Soaring Dragon’ suggests that people of greatness are now in the right places to lead others to success” with “the dragon [as] a symbol of greatness and the sky a symbol of transcendence”.

As well as reflecting Chinese cultural tradition, ‘Soaring Dragon’ also hints at a fundamental search for identity that – in one way or another – is a defining aspect of the modern post-colonial Hong Kong character. In ‘Soaring Dragon’, colonialism is regarded as something of a cultural ‘original sin’ – which usually makes this kind of ‘homecoming confession’ overtly explicit and pale. 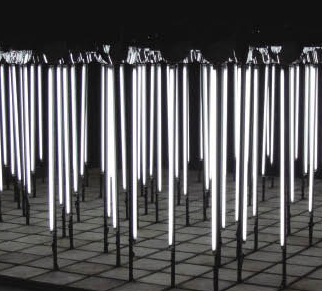 Not only is this an issue of identity with Hong Kong artists; it is also a challenge of how to deepen and transform artistic elements and concepts to create lasting appeal. Some critics in Hong Kong consider the Zen ink art by Lui Shou Kwan as a mere adaptation of the style of abstract expressionist artist Adolph Gottlieb, using Chinese ink painting expressions while suffering an imbalance between the treatment of mediums and the connotation the artwork carries. Hence, the disadvantage of ‘post-colonial’ symbolic Chinese expression pointed out by Wang Nanming: “contemporary Chinese arts are still in the context of the Chinese nature of art and the artists being Chinese. It is easy to create art with Chinese symbols, yet the challenges in doing situational art on Chinese issues have been acknowledged by a number of Chinese artists in the forefront… participating in situational art on Chinese issues requires an acute insight and a compelling critique. There are also difficulties in exhibiting these works… ”.[2]

As a post-colonial Hong Kong artist, to have an in-depth sense of transformation in Chinese cultural elements and connotations is an immense challenge. Yet it is also a topic worthy of local artists to ponder on, so as to express a flavour truly unique to Hong Kong.

Cheng is in his prime in terms of creativity. From his daring move from the relatively stable path of business administration and design to the rough terrain of fine art, it is evident that he is an artist who is confident and willing to embrace challenges. His new media work – after striking a balance with self-articulation and the search for identity – is worth waiting for.

Project | A Tale of Two Cities