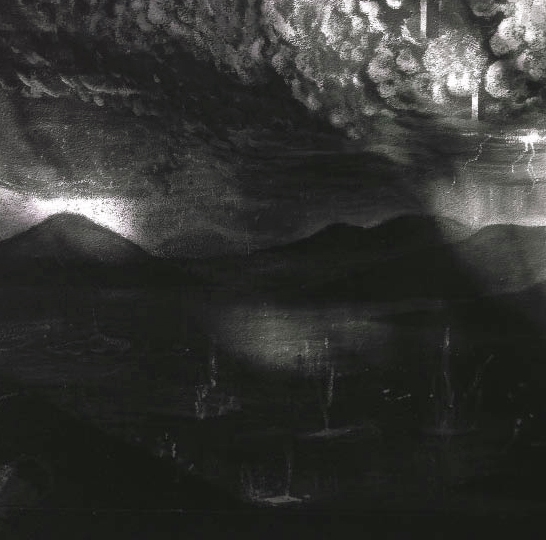 Legends carry ethical meanings and are narratives of vigilance. Stories selected for this exhibition are mostly taken from Greek mythology. When explaining the Greek view of humanity in his article ‘Views of Mankind’, Lin Yutang humorously stated that the Greeks made their gods like men: “That Olympian company is certainly a jovial, amorous, loving, lying, quarrelling and vow-breaking, petulant lot… and a marrying lot, too, and having unbelievably many illegitimate children… They (the Greeks) took human nature largely as it was.”

The opus on display emerged from the myths in the background where the title of each exhibit forms a question. The artist’s intention is to raise questions through myths about the development of this city. Let’s attempt to read the works of the exhibition Legends and the background from which they arise.

Some time ago I came across an article in Chinese National Geography. According to the author, without these tools, many classic landscape poems would not have been written. Without boats, Li Bai simply could not have floated down the Yangtze while reciting his famous lines.

In the article, Professor Wu Guosheng of Peking University went on to say that tools are both the media for humanity’s construction of self, and that for constructing the world. But the tools themselves are neutral. Using tools (technologies) in the process of becoming and how to be is what it means to be human. This ‘to be’ indicates the exercise of the will or logic. Production is a human being’s way of expressing their worthiness to their families and society. When the artist’s understanding of these tools materialises, a new logic arises from his imagination.

The artworks ‘Is it to be Continued?’ and ‘Can’t this be Terminated?’ strip away the layers that conceal the nature of tools, allowing the audience to pause and rediscover their existence and ponder with the artist the kind of world we are creating. Externally, mankind exploits all possible means to conquer nature, while internally making the best out of life by tapping into all our strengths. When tools were not as powerful as they are now, mankind was more willing to look up to the starry sky instead of looking down at the ground.

Site-specificity was a primary concern for the artist as he created works for the exhibition. If the exhibits are removed from the locale, the relationships formed with them and their meanings will likewise vanish.

To understand the site-specific nature of this exhibition is to understand the relationship between the artist and Sik On Street. It is predicated on an affection that persisted long after the artist had actually moved away from the area. Indeed, the artist has even maintained cordial relationships with former neighbours and proprietors who today support his on-site creative activities. He has been given free rein to literally paint on the walls. Some shop-owners even gave up window space to display the work ‘Is there Nothing Outside the Window?’.

The aforementioned work itself comprises a giant window blind made of aerial shots of various cities. It evokes the history of the street (which at one point housed a window blind workshop) while imparting a moral message of myths and reflecting on urban development. This site-specific cooperation is the realisation of human bonding which comes close to the social ideal of giving rest to the aged and tenderness to the young.

The work ‘Is it to be Continued?’ simulates the manner modern social development via a pair of iron sandals trampling a landscape to a pulp. But why is this issue even being discussed through art? Surely, a direct verbal or textual description of the issue would be more straightforward and effective?

Perhaps, but the artist’s aim is not so much to help the viewer to understand as to make him feel. Artistic creation is an act of realising the boundless ideas of the mind. Trying to read the works of Carl Cheng while following along with his thoughts requires an awareness of our own situation and limitations, which may in turn help us to reflect on the threats and issues we are facing, and to discover more ways for humanity to survive.

Do not squander the fire Prometheus stole for mankind.

Project | A Tale of Two Cities